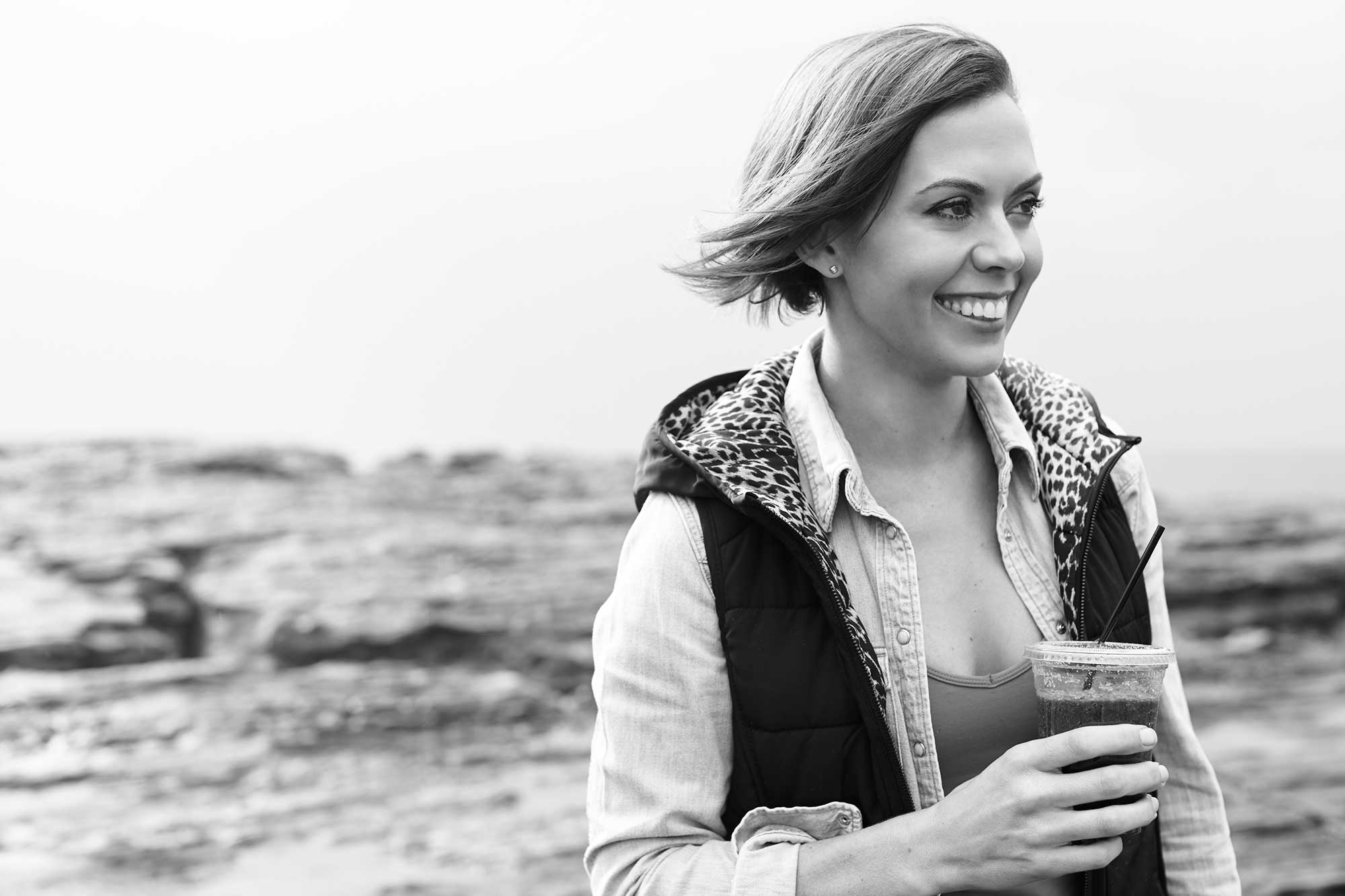 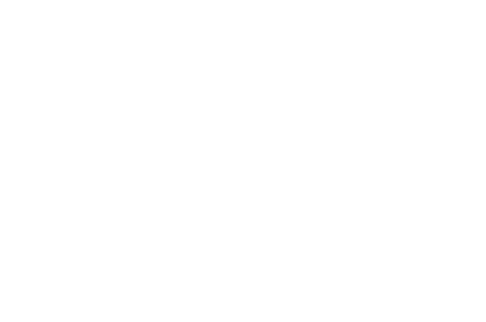 Foods to avoid during pregnancy and why?

There are some foods you should not eat when you’re pregnant because they might make you unwell or harm your baby. Make sure you know the important facts about which foods you should avoid due to the risk of listeria and toxoplasmosis. If in doubt, the best foods to eat are freshly cooked or freshly prepared food.

Read on to learn about what foods you should avoid : 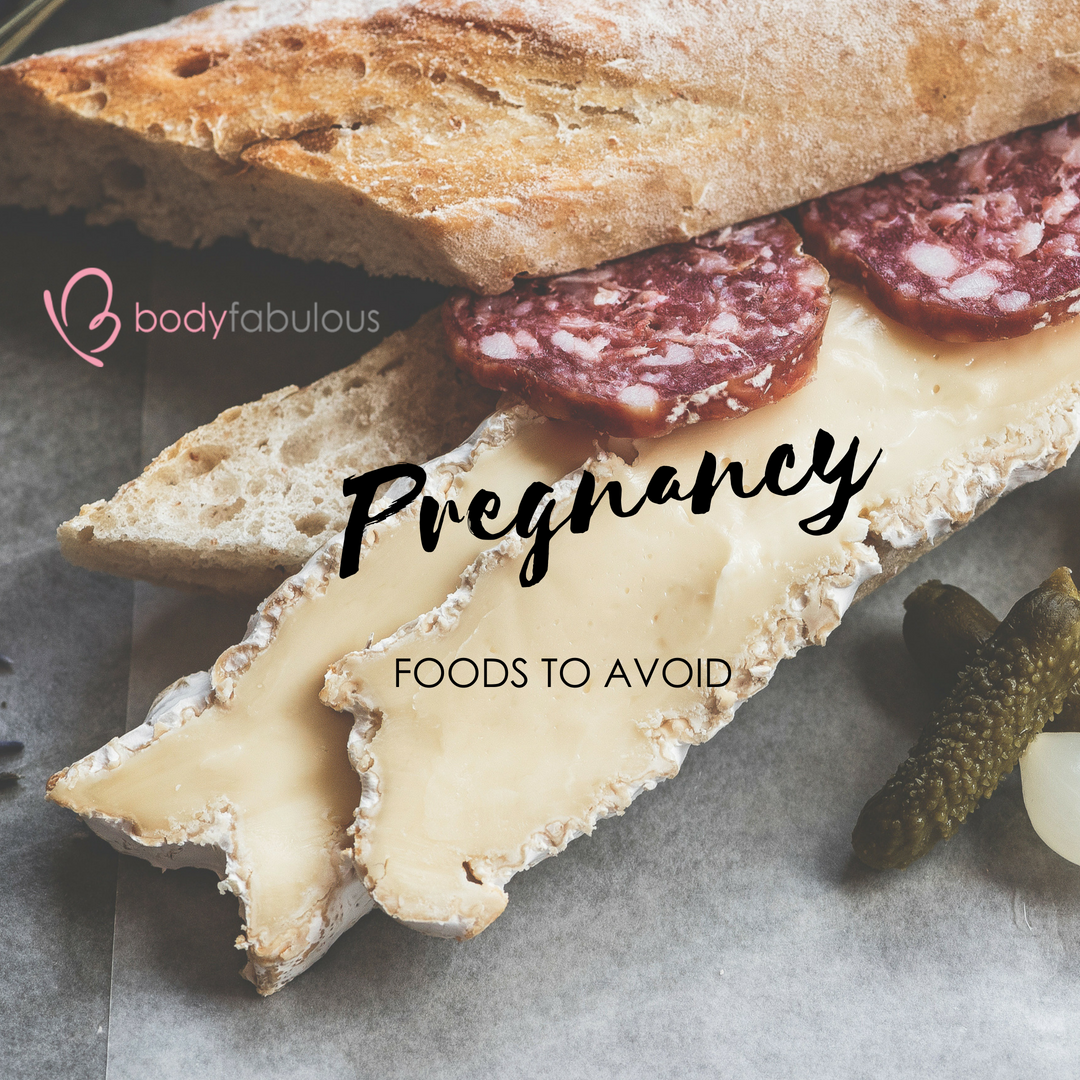 During pregnancy avoid mould-ripened soft cheese, such as brie, camembert and chevre (a type of goat’s cheese) and others with a similar rind. You should also not eat soft blue-veined cheeses  or gorgonzola. These are made with mould and they can contain listeria, a type of bacteria that can harm your unborn baby. Although infection with listeria (listeriosis) is rare, it is important to be careful during pregnancy because even a mild form of the illness in a pregnant woman won’t harm the mother, but can lead to miscarriage, stillbirth or severe illness in an unborn baby.

If you are craving cheese, eat hard cheeses such as cheddar, parmesan and stilton. Hard cheeses don’t contain as much water as soft cheeses so bacteria are less likely to grow in them. Most other types of cheese are okay to eat, but make sure they’re made from pasteurised milk. They include cottage cheese, mozzarella, cream cheese, paneer, halloumi, goat’s cheese and processed cheeses such as cheese spreads.

Cheese is also a fantastic way to boost your essential protein requirements during pregnancy.

Are eggs safe during pregnancy ?

Raw and undercooked eggs must be avoided. Always cook eggs until the yolk and white are not runny anymore. However please don’t avoid egg yolks all together. The essential nutrient choline is found in egg yolks and has the same if not more beneficial effects on a developing baby as folate. Also ignore the advice that egg yolks are full of cholesterol – this is incredibly out of date, eggs are a pregnancy superfood !

A recent study from University of Sydney found eating up to 12 eggs per week for a year did not increase cardiovascular risk factors in people with pre-diabetes and type 2 diabetes. Learn more here. Furthermore, there is recent evidence to suggest that consumption of eggs every day is NOT associated with increased risk of coronary heart disease.

Many women only consume a fraction of the choline they need during pregnancy partly because food sources are limited or they are worried about eating egg yolks. Eggs are a superfood you need 450mg of choline daily during pregnancy so please eat them for optimal fetal development – just ensure the yolks are not runny to avoid any risk of listeria.

You must also avoid eating chocolate mousse and fresh mayonnaise that may contain raw egg. Salad dressings that you buy in supermarkets or off the shelf, including mayonnaise have been made using pasteurized egg and are generally considered safe to consume during pregnancy. 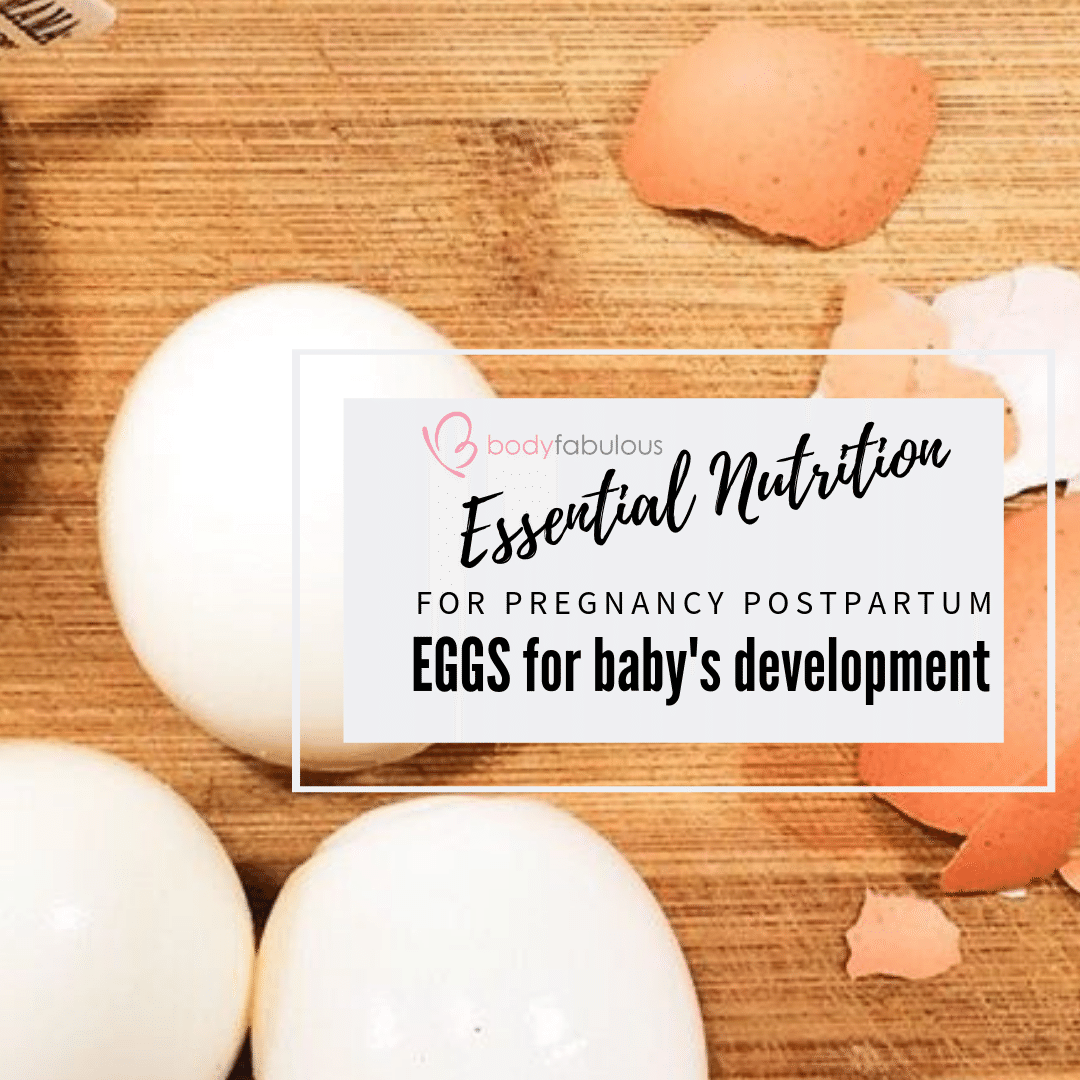 Should I avoid meat during pregnancy ?

15% more protein is required daily during pregnancy. As protein is one of the major nutritional building blocks for a growing baby . Meat is an excellent source of protein during pregnancy however, make sure it is well-cooked and that the juices run clear. Avoid any rare meat – and includes raw sashimi or medium to rare beef.  As toxoplasmosis is an infection caused by a parasite that can be found in meat, soil, cat faeces and untreated water. If you are pregnant the infection can damage your baby, but it’s important to remember that toxoplasmosis in pregnancy is very rare.

This risk also includes cold cured meat products like prosciutto, ham and salami. So it’s best to avoid them, as well as chicken or turkey which is cooked and served cold must also be avoided.

Read more here about meat alternatives you can have to meat your protein requirements during pregnancy.

Is fish and seafood ok during pregnancy ?

Raw fish including sushi should be avoided as it is not safe to consume during pregnancy. Also fresh raw oysters, shellfish or prawns that are ready to eat and chilled should be avoided. On the other hand, prawns or other crustaceans that are well cooked until they are steaming hot can be enjoyed 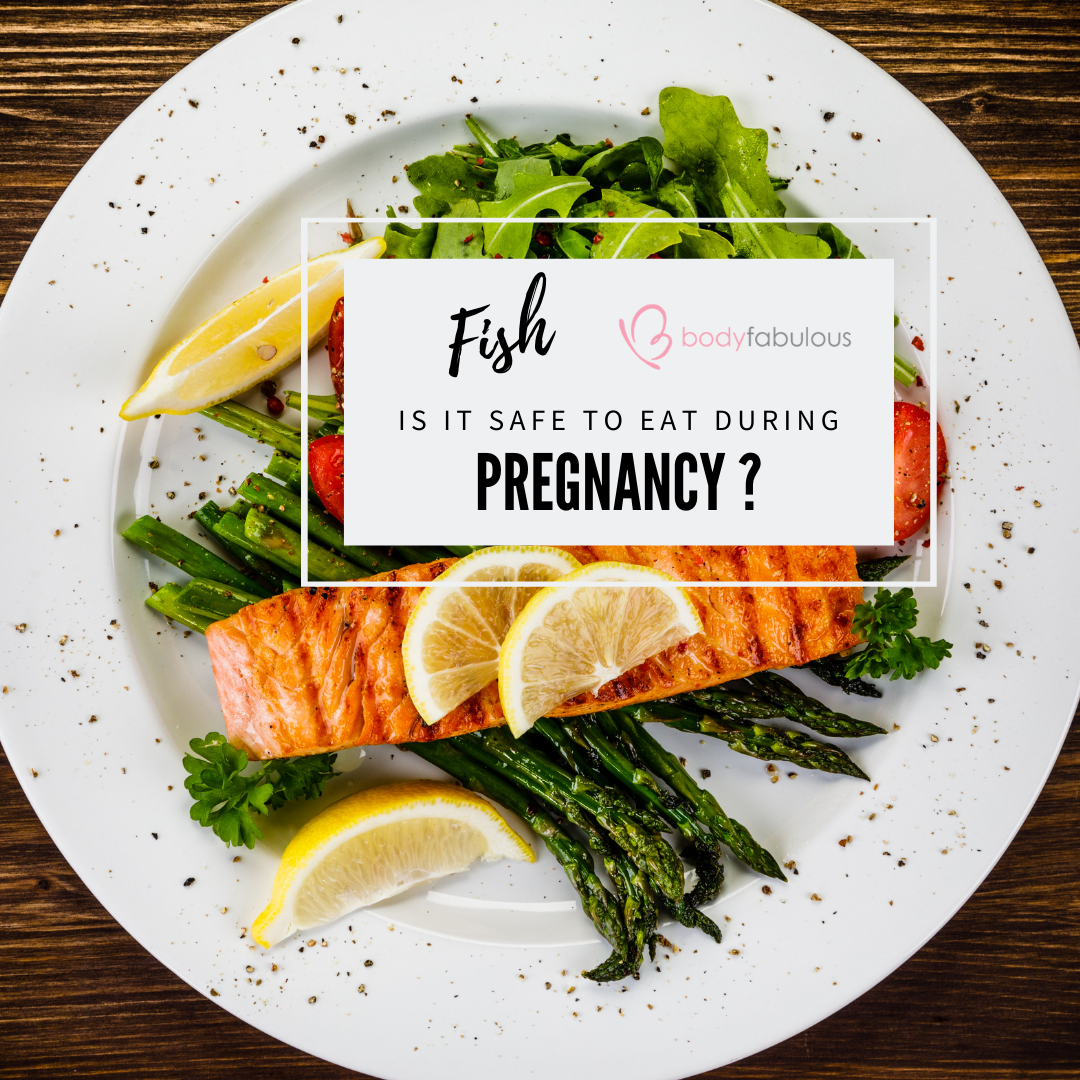 Prepackaged salads should be avoided during pregnancy

There is a huge risk for pregnant women who consume pre-made salads because these pre-prepared or pre-packaged salads have been sitting in a supermarket, deli counter or buffet for a number of hours and carry a higher risk of listeria contamination.

If you have milk, drink only pasteurised or UHT (ultra-heat treated) milk – sometimes also called long-life milk. If only raw (unpasteurised) milk is available, boil it first. Don’t drink unpasteurised goat’s or sheep’s milk or eat food that is made out of them, such as soft goat’s cheese.

How much caffeine should I have during pregnancy ?

Ideally, it is best for bub to eliminate caffeine altogether, but if you need a fix, make sure you don’t consume more than the following daily limits; 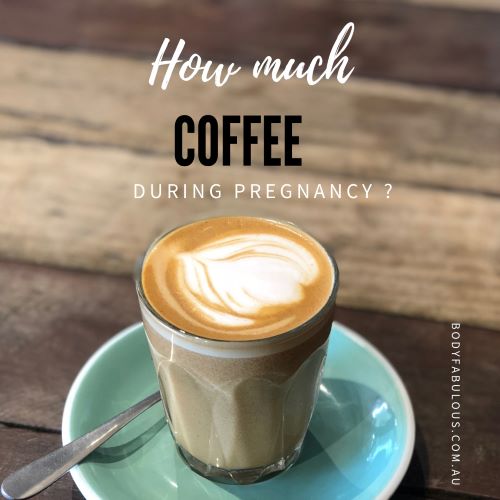 Why Alcohol should be avoided during pregnancy

There is strong evidence that high levels of alcohol consumption during pregnancy cause fetal damage and intrauterine growth retardation. It is recommended that pregnant women do not drink at all during pregnancy. If you do drink – limit it to 1 standard drink per week only.

Healthy Fats are Essential during pregnancy

Fats are ESSENTIAL for your growing baby. Please don’t fear healthy fats as they will NOT make you fat, in fact they will keep you fuller for longer and stop your craving sugar laden unhealthy snacks.  Your body and your baby’s growing body needs fat soluble vitamins and other nutrients during and after pregnancy. Breast milk is made up of 55% fat and your body starts making that during pregnancy, plus your baby’s developing brain is made up of 60% fat from the early days in pregnancy – so quality fat is an essential part of your prenatal nutrition. Grab your complimentary Nutrition Guide here 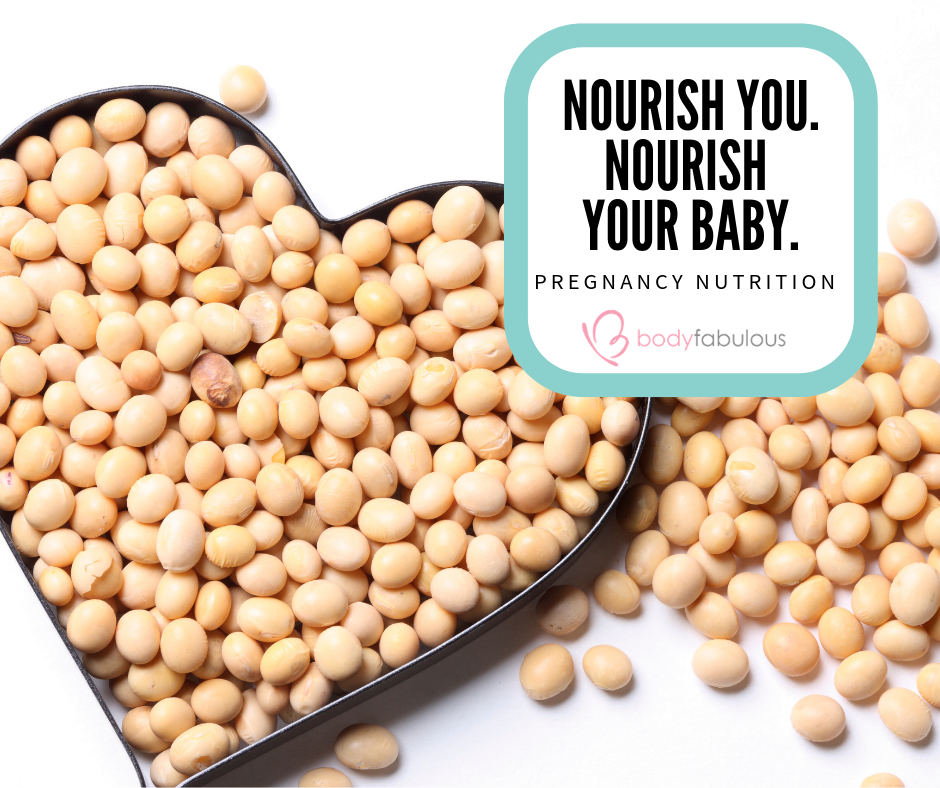 If you are unsure about a particular food or drink, it’s not worth taking a risk. So speak to health professional before consumption. If you can’t, then avoid suspicious foods until you are sure both you and your baby are not at risk. Always also try to carry a nutritious snack with you including nuts, fresh fruit so if there limited food choices available you don’t go hungry.

Navigating pregnancy and beyond can be overwhelming the advice you might receive and read.  Join my comprehensive pregnancy and postpartum exercise program and included is an 8 week clinical nutrition plan, including shopping lists, meal plans and recipes – learn more here 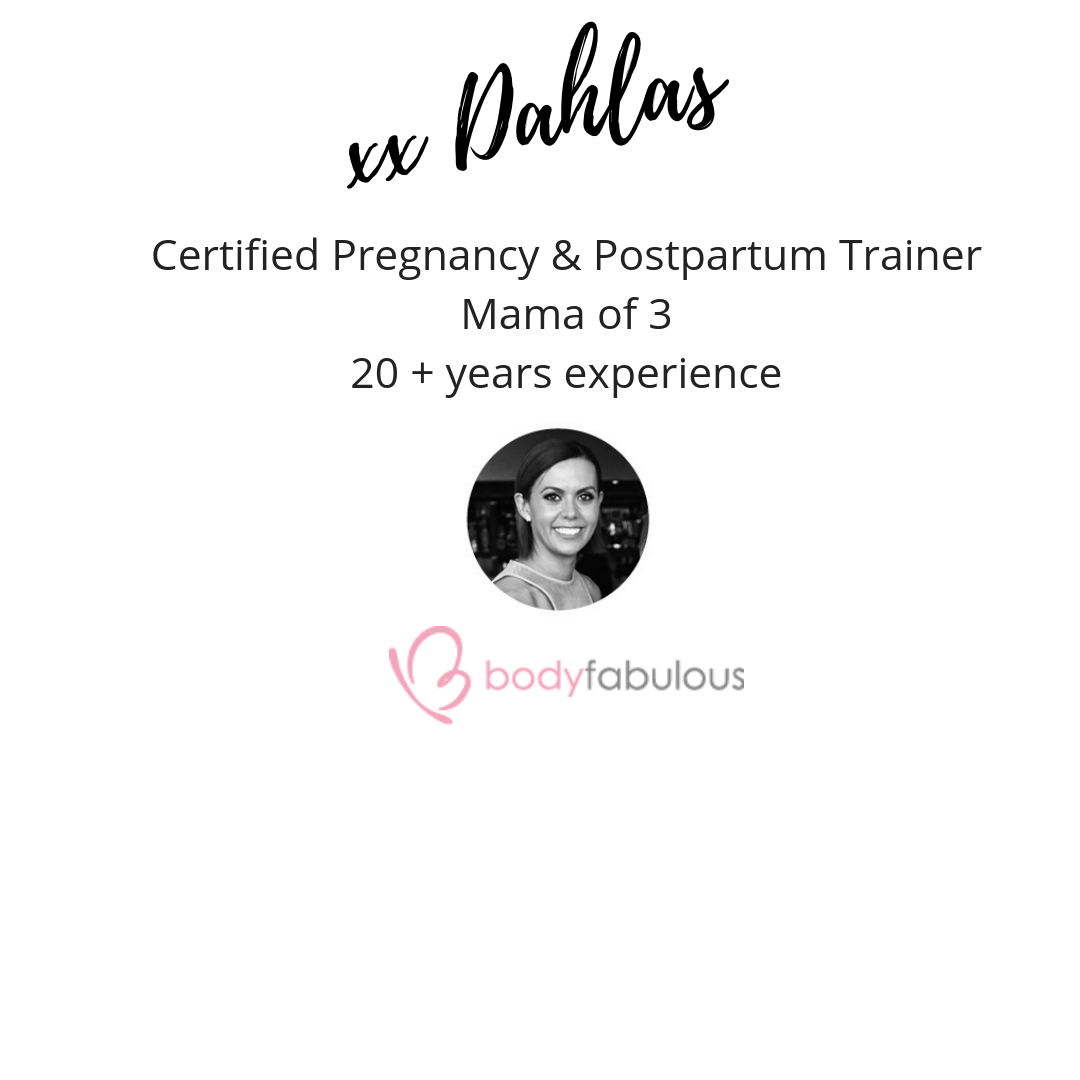 p.s want to learn how to exercise safely and effectively during pregnancy ? Grab my free guide below. 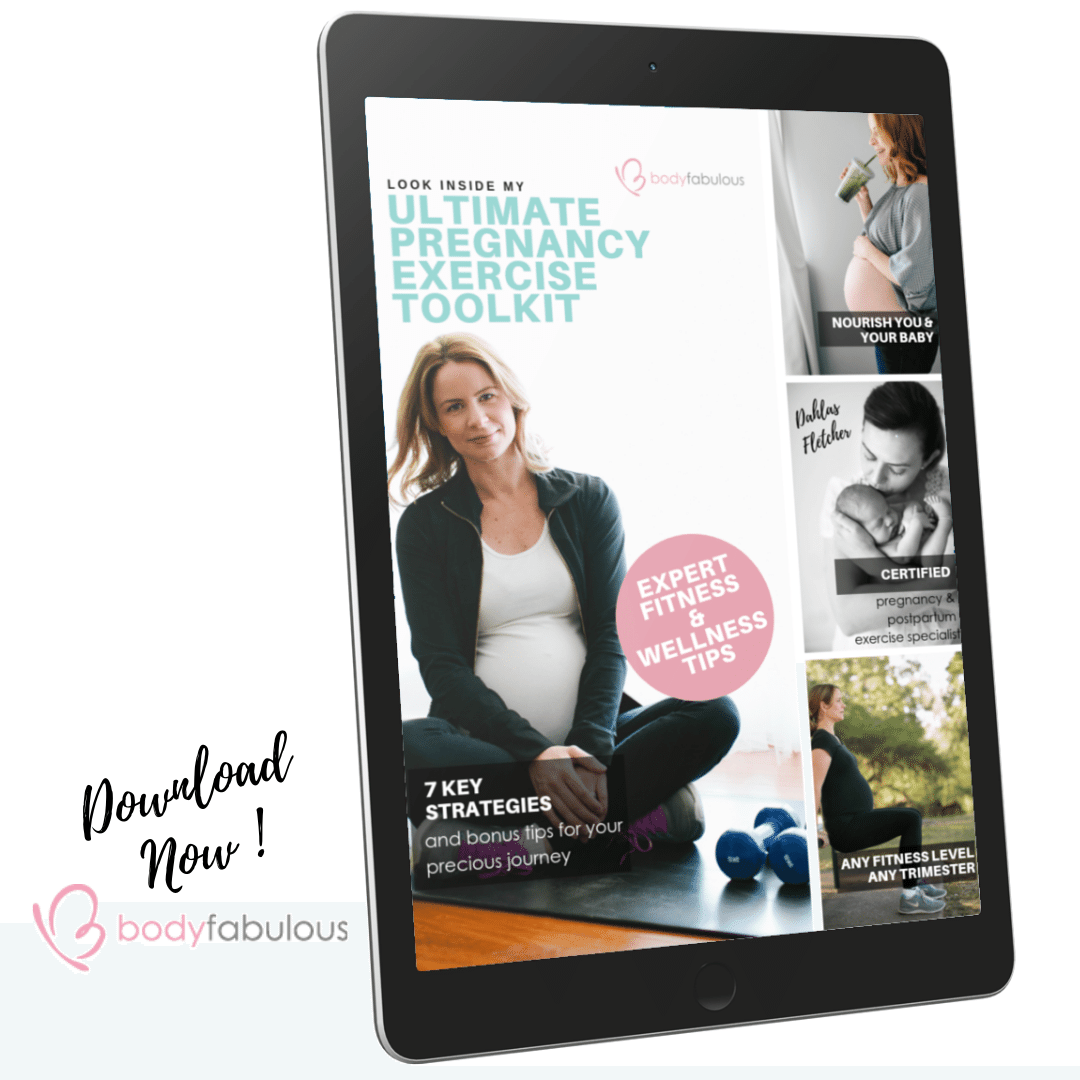 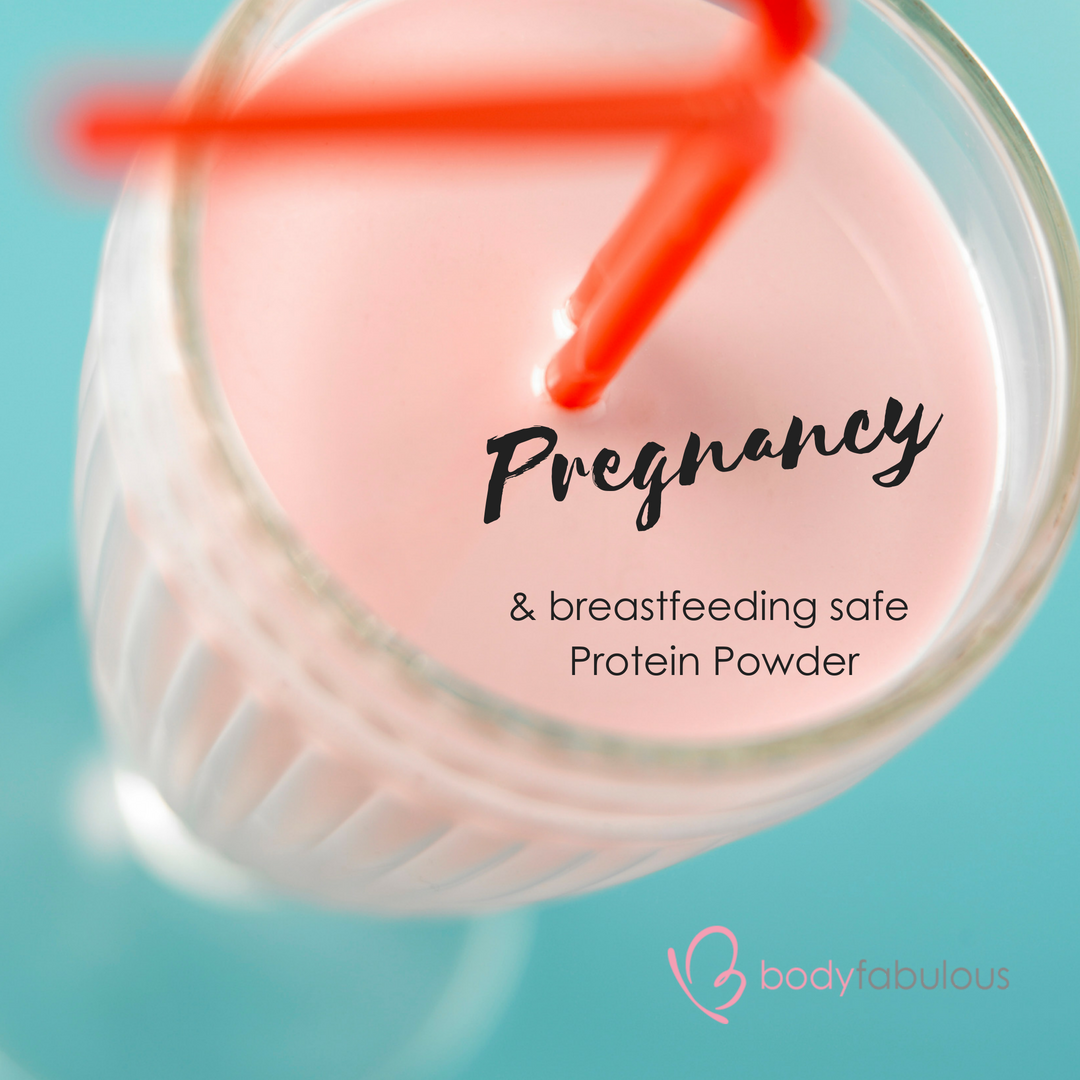 Why you need 15% more Protein during Pregnancy 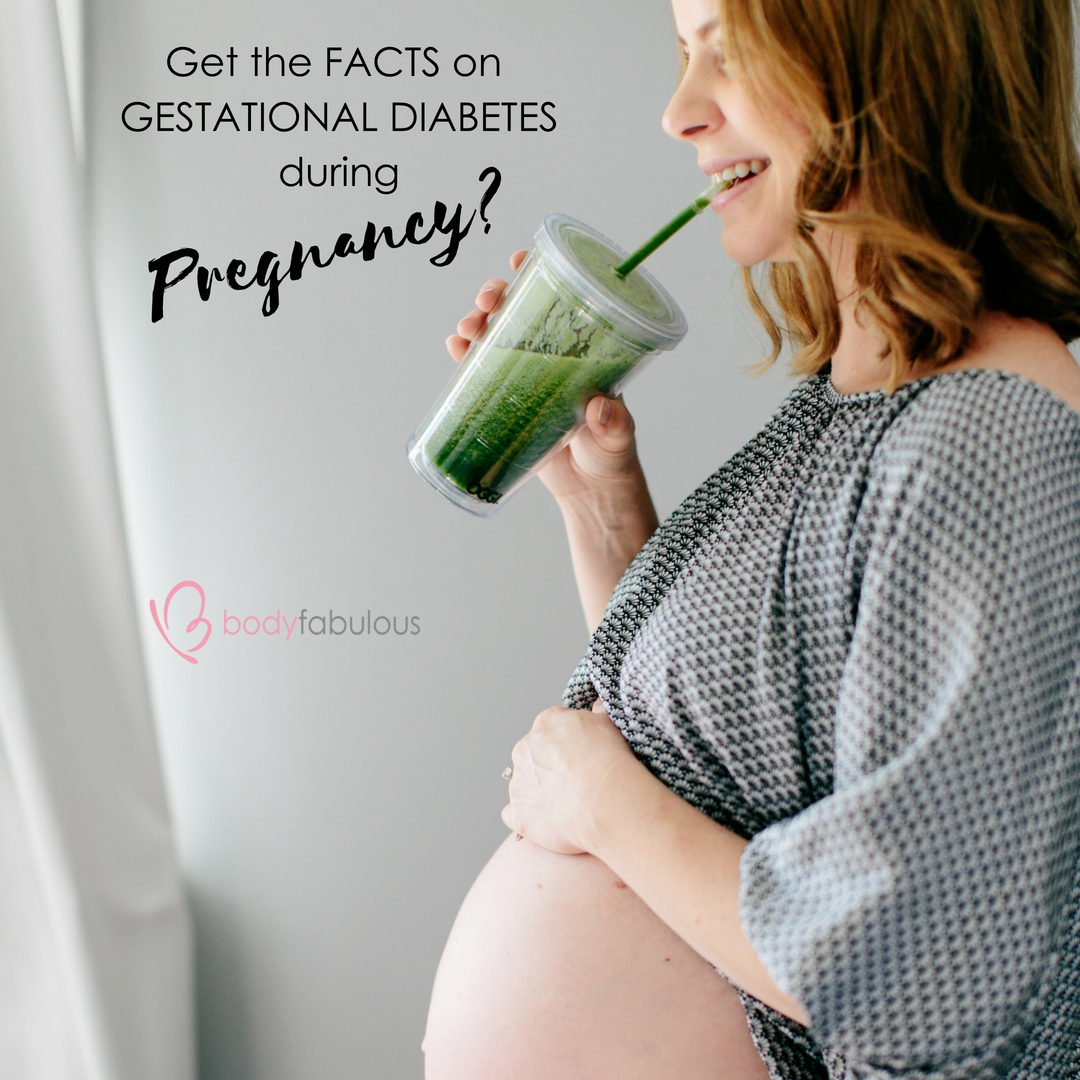 Gestational Diabetes - how to control and avoid it ! 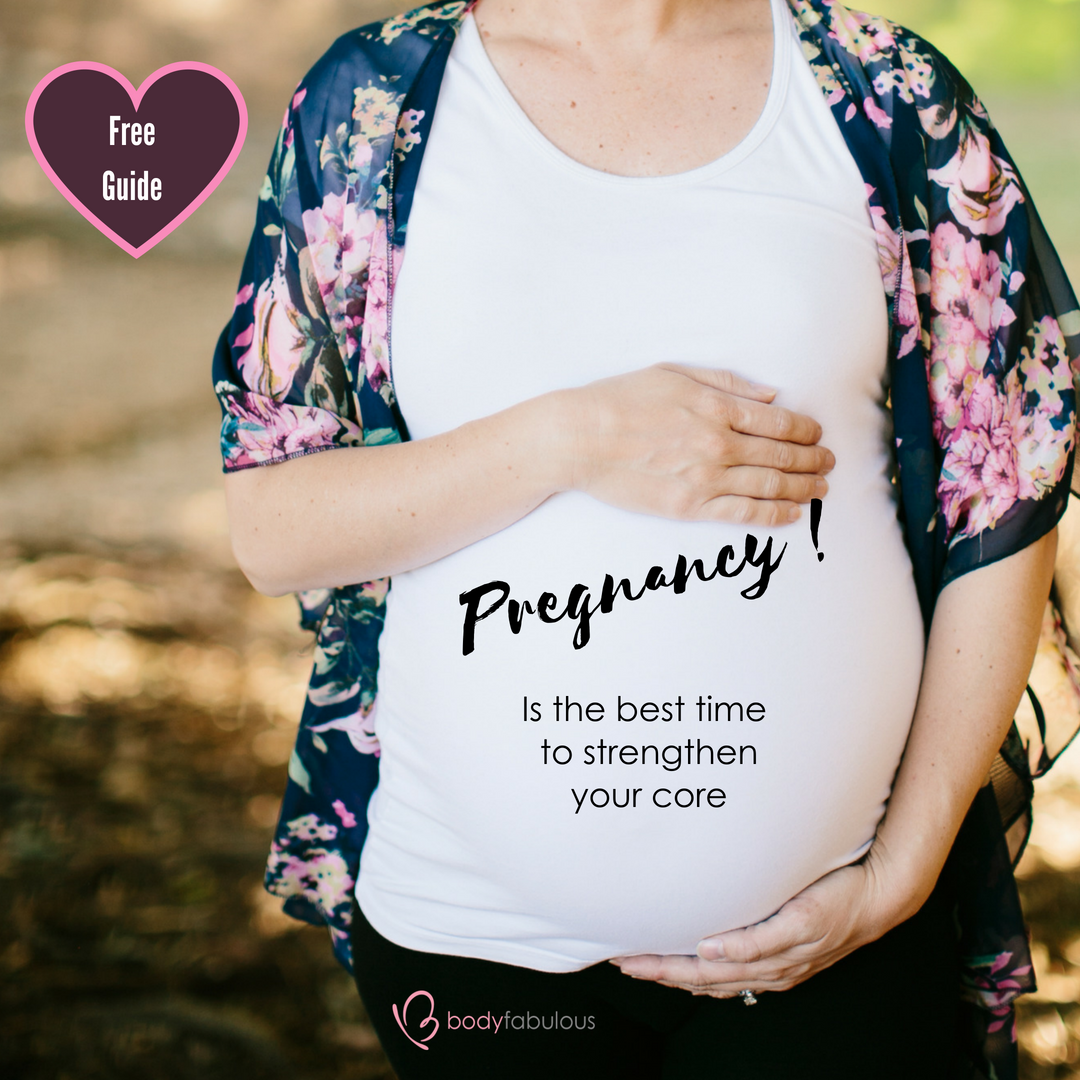 Pregnancy is the BEST time to strengthen your core !

Fill out our Enquiry Form for further information about everything BodyFabulous

"Dahlas, i just wanted to say thanks for your fantastic program. I loved going to the gym before falling pregnant but now it is difficult to know what I can and can’t do. I love that I really feel i’ve actually done something when I’ve finished your workouts and that it is safely benefiting both me and my baby."

More BANG for your BUCK 🤓 When short on time, a

Many new clients I meet often think that postpartu